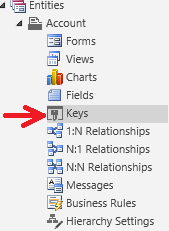 Choose New. On the form, fill in the required fields (Display Name and Name) and then choose and add the fields to the key. Save the key. Below is the example where accountnumber is used as an Alternate Key. 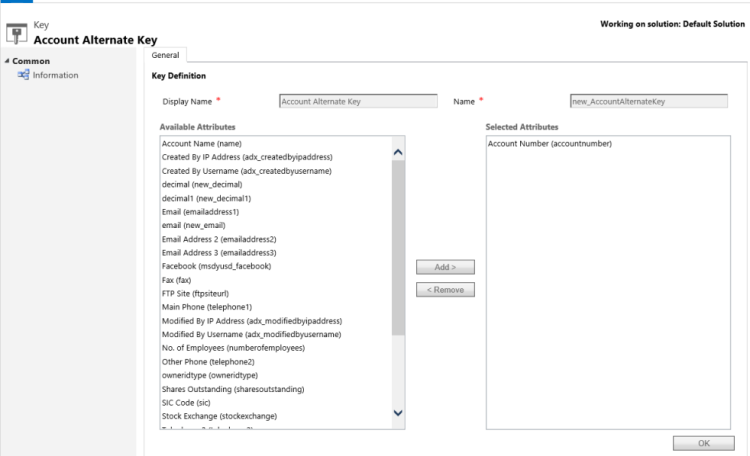 Only upto 5 Keys can be defined as Alternate Keys

Attributes of only above mentioned data types will appear in the selection window.

Also CRM makes sure that the Alternate Key values are uniquely defined in CRM. That means if we try to create a record with same alternate key value then CRM will throw error saying Duplicate Record.

Sometimes we want one attribute to be unique. We can define duplicate rule but users have the ability to bypass that rule. Well, if we define such attributes as Alternate Keys we do not need to configure duplicate rule and CRM will ensure that the value in that attribute is always unique. If one tries to create duplicate data then CRM will check for uniqueness and throw an error message saying the record is already defined in a particular X key cannot be defined again.

As described in my earlier blog for Upsert Alternate Keys plays a vital role to define if the record will be updated or inserted. You can check the details in this blog.

There are two ways you can define Entity record instance.

Alternate Keys cannot be used to delete or retrieve a particular record. You need to use GUID for that purpose.

Also, the above defined constructor doesn’t work for Create request; you need to use usual constructor to define the entity. The above constructor is useful for UpsertRequest and for UpdateRequest

EntityReference can also be defined the way Entity is defined as described above.